  Back to Blog 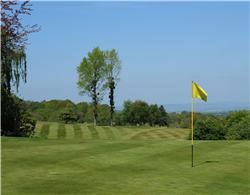 HEREFORDSHIRE Golf Club had a tree planting ceremony as part of their 50th anniversary celebrations of the land purchase of their Foxley Estate course.

A large number of Hardwood trees were planted to celebrate the anniversary by the side of the 14th fairway.

The trees were also planted in memory of the original committee of the Herefordshire Golf Club whose foresight bought the land from the Davenport family 50 years ago.

Also in memory of Alan Blake’s two brothers, Warwick and Bill, who often played the course.


The tree was planted by Alan, the only remaining member of the original committee still "standing".

The tree was held in the picture by club captain David Ingham while Alan Blake planted the Oak Tree.

The area of trees is to be known as the 'Blake's Bower'.

As part of the anniversary the club are also introducing new measures to help the popular club thrive long into the future including introducing a new Family Membership Scheme and annual subscription rate in order to attract younger members of the future.


The Herefordshire Golf Club is also celebrating the appointment of two of its past captains to top positions within the Shropshire and Herefordshire Union of Golf Clubs.

Doug Parry has been appointed President Elect of the Union and will take his place as President in two years time.

Parry is the fourth member of The Herefordshire to be appointed President following Cedric Griffin in 1967/68, Edward Cant in 1873/74 and Bill Bullock in 2001/02.

Meanwhile John Devereux is the new Captain of the Shropshire and Herefordshire Golf Club Captains who play 17 matches against other counties and organisations.

The group travel far and wide to compete on new courses including The Isle of Man and Manchester in the north and Devon and Somerset in the south.

Devereux is the fifth member of The Herefordshire to be appointed Captain of Captains. The group also play spring, autumn and winter meetings in Shropshire and Herefordshire.


Any past captain can contact John Devereux on 01432 880134 or email: jandjdevereux@outlook.com for more information.

Thank you! Your submission has been received!
Oops! Something went wrong while submitting the form.
Subscribe and get 10% OFF on your first night.